So, We picked the wrong cow.

Have you ever picked THE WRONG ANIMAL?

Like… let’s say for some crazy reason, you wanted to get a goat.

SO you find a goat on craigslist, head out and pick it up, only to realize a few days (or maybe hours) later that you choose poorly!

You may even already own a bunch of goats, and LOVE them, but THIS SPECIFIC ONE you don’t.

Yeah. WE PICKED THE WRONG COW….

let’s go back a few months.

K wanted to get a NEW MILK COW… and NOT A MINI JERSEY!

We were looking for a higher production dairy cow than our current Mini Jersey cows.

After much research, the Guernsey breed seemed like a good fit.

It was a cold spring day, and we packed the family up to go visit a local dairy farm that raises Guernsey cows.

At the dairy we saw many cows to pick from. It was actually a little overwhelming to have so many choices for our future new milk cow!

After much deliberating we decided to get a large, heavy producing show cow named Massachusetts.

Massy’ was a very large Guernsey cow, made a lot of milk, had high components (good for butter and cheese making), and as a show cow, she had been handled quite a bit!

She seemed like a good fit for us. BUT… She wasn’t.

There were a few things about Massachusetts, 3 actually, that helped us realize that she was WRONG for us.

We were not shocked by Massy kicking, nor were we going to send her back to the dairy she came from for just a few kicks…

Cows usually can be trained to not kick, there are even some great tools you can use to keep a cow from kicking you.

For example, in the last video about Massy we shared the Kick Stop. (affiliate link) 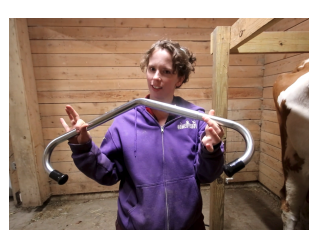 This tool constricts leg movement of the cow, turning a strong kick into a slight nudge. It is a lifesaver… literally!

Now, we could have used the kick stop every day and she would not have been able to kick us, but she still WANTED to kick. We want to work with cows that get trained to our stanchion and STOP kicking, and this was not happening.

Milking a kicky cow with the kick stop EVERY DAY is like going on a walk with an aggressive dog wearing a muzzle EVERY DAY.

Yes you can do it, the muzzle will even keep people safe and you out of trouble, but it’s still not really what you want. You want a nice well trained dog that you can go peacefully walking with, enjoying nature, your partnership with your animal, and some quiet time to yourself.

Massy may have eventually been completely trained out of the kicking, but we will never know. Because she is not here anymore.

Huh? Too dairy… meaning she was a big milk producer, a cow that dairy farmers dream about.

When you’re shopping for a dairy cow from a local dairy farm, how is this a problem?

You have beef cows, they’re thick, they’re heavy, they have been selectively bred to grow BIG.

Then you have dairy cows.

Dairy cows are finer boned, thinner, they’re putting the protein they’re getting into their milk, not meat.

How you feed and manage those 2 cows can be different, focused on their unique needs.

But now, even in these 2 categories, meat and dairy, there is a spectrum.

Right here on our own farm you have a whole spectrum of diary cows.

For example, Luna, one of our Mini Jerseys, is short, thicker (almost built more like a beef than a dairy cow), gets fat off grass, but she is a lower producer of milk.

Then there is Honeybee. She is also a Mini Jersey, but a bit more ‘milky’ or ‘dairy’ than Luna.

She is the shortest Mini of ours. But she is not as thick as luna, has a really nice udder, she puts more into her milk than luna, and for it you will notice she is not as ‘fat’ off grass.

Massachusetts was very dairy. She was a big cow who produced a lot of milk, and big production can also mean big input.

To keep up with her production, Massy needed to be fed a LOT of grain and hay.

Now that doesn’t mean all guernseys are going to be similar in the sense that every guernsey or every dairy cow is going to be a high production, high input high output.

There are less ‘dairy’ cows who will produce enough milk for a homestead family that will not need as much feed.

If you’re looking for a family cow it can be a good idea to go to a local dairy and actually ask for one of their lower producing cows.

A dairy farmer LOVES a very dairy cow like Massy.

There are plenty of families that would LOVE to have her on their farm.

As a homesteading family, focusing on living off the land as much as possible, growing a herd of self sufficient dairy cows, Massy’s input needs just didn’t match the style of management that we do here on our homestead.

This was strike 2, but like all good baseball games, we’re still waiting for strike 3.

One of the things that appealed to us about Massachusetts in the beginning was she was a show cow.

As a show cow, She had been very used to being handled.

She was very comfortable around people, which translated as almost too comfortable, kind of pushy.

K is a little thing, and while she makes up for her size by being a force of nature (she is laughing as she reads this)

that force is still limited to her size.

Massy was a bit too much for K to be comfortable with.

On top of that, K felt there wasn’t a real connection with Massy.

“I totally have my favorite cows. Luna… she could never breed again and I think luna would always be on our farm because luna and I, we’re like buddies. And yes, she’s a cow, she’s not my child, it’s different.

But still our personalities work well together. Massachusetts had a bond with Renee, who’s the girl who worked with her since she was a baby and showed her at the fairs and everything, they worked together you could see it.

It wasn’t the same with us, she didn’t have that same connection with us.”

Mentors to the Rescue…

After a month of working with Massy, trying to get past these strikes, K needed some guidance from one of our mentors, Sherry, the awesome dairy farmer who along with her husband Dan and kids, runs the farm Massy came from.

Sherry offered to come, watch us milk, see if we were doing something wrong, AND bring another cow for us to try.

She’s got a lot more experience than us, we really respect her opinion, we were like okay we’ll do it, let’s try it!

Sherry, Dan and Renee their daughter and the owner of Massy came over to our farm for an evening milking.

It was awesome to have so many years of professional milking experience in our little dairy parlor!

They did find a few kinks in our system, and offered some great advice, but overall there wasn’t something glaring wrong with our system that would have caused Massy to kick.

After some deliberation we decided it was worth trying a different cow, so they brought out Fancy…

But looking closer, you will notice a lot of differences in Fancy and Massy’s appearance.

Her build is less of a traditional ‘dairy’ build, not quite as tall and thin.

Where Massy has a large, lower hanging udder, Fancy’s keeps tighter to her body.

She’s rounder which is good for us as a homestead, she’s not going to have such high production, she’s going to keep easier.

At first glance she looked like a better fit for our homestead. But of course, we needed to milk her!

We brought her in and milked her. She did great!

She didn’t lift one foot off the ground.

And how about personality? That was a better fit too.

K Says of Fancy… “Fancy is so calm! I love her personality, she loves to be scratched all over, I love this cow! I look forward every day to milking this cow.

When I was trying to decide what I was going to do with Massachusetts, someone on the family cow forum advice really stuck with me… they said life’s too short to deal with a kicking cow.

One more plus… Fancy and luna are best buddies now. It’s really cute seeing them in the field together.

Have you ever seen the Arnold Schwarzenegger and Danny Devito movie Twins? 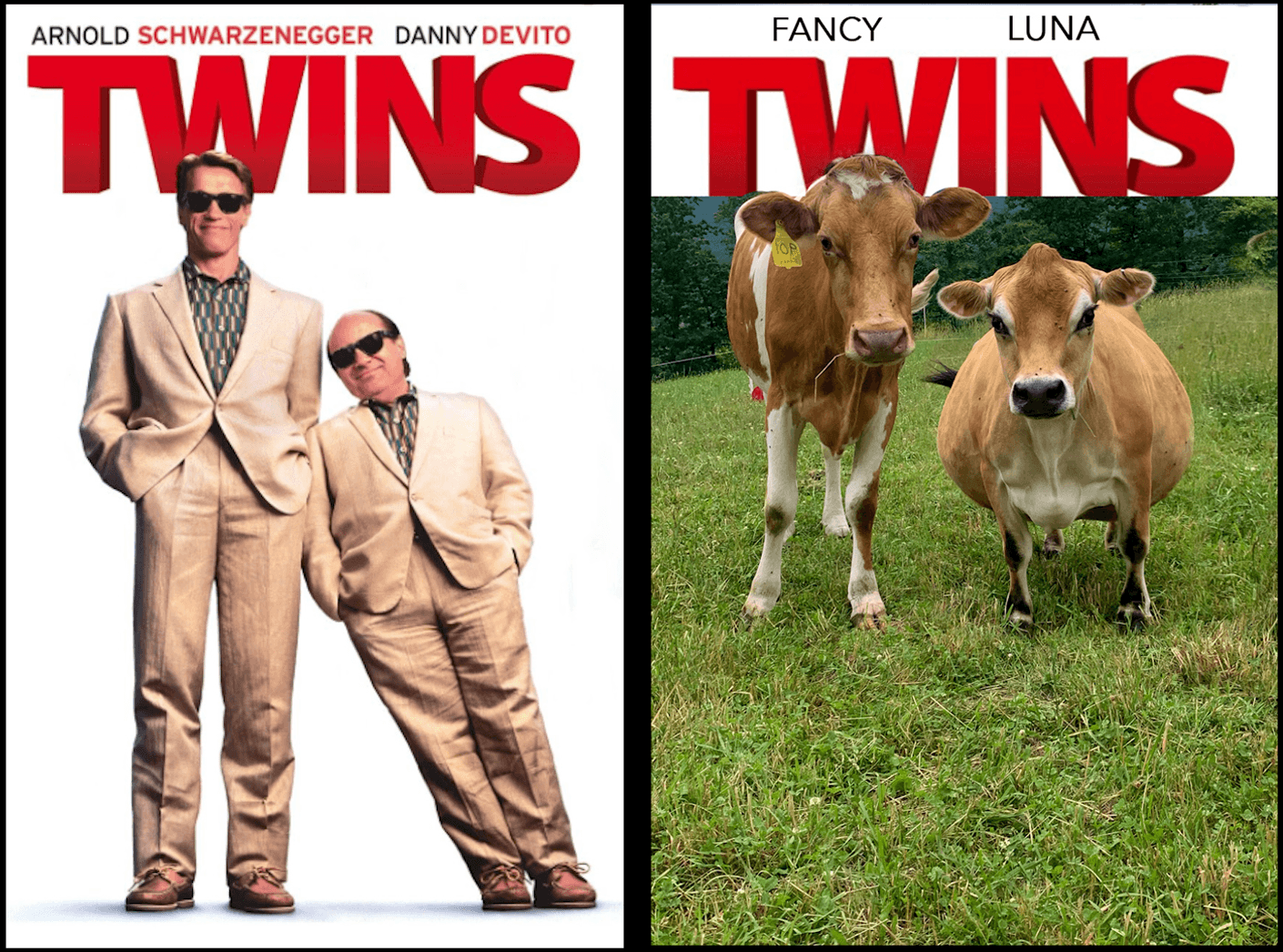 We have to give Sherry, Dan and Renee a huge thanks because they were willing to spend hours and hours working with us to find the right cow for us. If you want to get in contact with them send us an email and we can put you in contact with some great guernsey breeders western PA.

Did you enjoy this Post? JOIN OUR EMAIL LIST so you don’t miss any of our weekly posts! 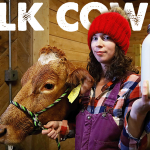 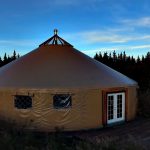 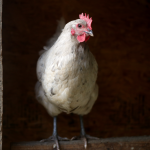