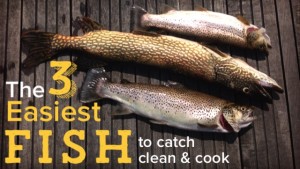 If you want to catch and cook fish, don’t worry! it isn’t as hard as it may seem. There are very simple methods to catching and cooking fresh fish!

Don’t misunderstand me. I’m no fantastic fly fisherman, I don’t travel to secluded streams to outsmart champion size trout. No…

What I can do is go out to a locally stocked pond, catch a limit of fish, and have them prepared for dinner that night!

And you can too!

In fact, catching and cooking fresh fish dinner is the easiest way to learn how to take an animal from pasture to plate (or stream to steam…?).

Because of the fact that everyone has access to freshwater, we’re going to discuss the easiest way to catch some good eating freshwater fish.

The easiest way to load up on freshwater fish is to use worms.

Spend an hour flipping logs or digging up the compost pile, and you will have enough worms to last a week! Get a small fishing pole, with 4 to 8 lb test (that is the type of line used. Monofilament is best for a beginner fisherman), and a package of size 8 eagle claw baitholder hooks. Skip the bobber,it’s unnecessary.

Tie a clinch knot to the hook, thread half of a worm (for bass or trout) or a piece of a worm (for panfish) onto your hook, and cast it on in. Let the worm sink to the bottom, and watch your line. When it suddenly starts moving on you, reel the line tight, and quickly jerk the rod backward, to “set the hook” into the fish’s mouth.

Now lets talk about your target. There are 3 fish you should target that are easy to catch, clean, and eat!

Panfish
Panfish are a conglomerate of different types of fish, including Sunny’s, or Pumkinseed, Crappie’s, and Bluegills. These fish are usually the easiest fish in a pond to catch, and actually are pretty good table fare as well! Fish for them by the banks of the pond, near docks, and by fallen trees. Also look for circular depressions in the sand, as these can be beds.

To clean panfish for dinner, remove the scales by sliding a knife or scaler against the scales, flicking them off of the fish. Then slice a small fillet off, by running a knife down the back and side of the fish, toward the rear. This creates a small bite sized fillet.

Trout
Usually found in streams or larger ponds and lakes, trout are in the salmonid family, and resemble a smaller salmon. They are very good for eating and stocked fish are not difficult to catch.

Look for pools and ripples behind rocks in rivers. This is where trout will be waiting for a tasty fish to float by, and that is what your worm will look like. Let the line drift downstream, but notice any taps or increase in speed in the line. Again, reel slack in, and set the hook.

Trout can be filleted, or also can be gutted and cooked whole. Run a small knife into the anus and cut up the belly of the fish, only use the tip of the knife, so as not to puncture the guts. Run it all the way to the gills. Reach into the cavity, and rip out the insides, being careful to watch out for hooks the fish may have swallowed. Break the membrane running the length of the spine and clean out the cavity there. Once all the guts have been removed and cavity washed, the whole trout can be cooked, skin on or off.

Walleye are a bit tougher to catch, but are, in my opinion, the best tasting freshwater fish. They are not as prevalent as the 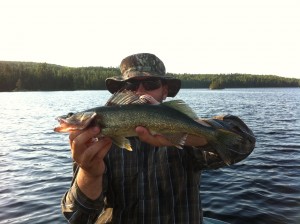 other two fish mentioned, but if you can find them, they are well worth the challenge. Usually found dwelling at the bottom of lakes and streams, walleye can be best caught in the early morning and late evening hours, as the sun rises and sets. If deep, use a jig head instead of a bait holder hook when fishing for walleye.

Walleye do great filleted and are a real freshwater delicacy.

Cooking Freshwater Fish
All these fish do fine pan fried in butter. If you want to add a little flavor or texture to the meal, encrust the fish or fillets by dipping them in an egg wash and then adding lemon pepper, panko, or any other seasoning you like. Just enough time on both sides so that the fish is cooked through, but not dried and overcooked. Monitor the fish while it cooks, as times will depend on the heat and size of the meat.

Fish are by far the easiest animal to learn to clean and cook. And everyone has access to edible freshwater fish. So, if you want to learn to butcher, grab a pole, load up on worms, and get ready for a feast!

Make sure to Join the Email List so you get all of our series 21 steps towards sustainability! 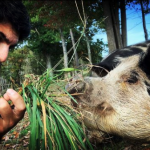 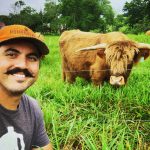 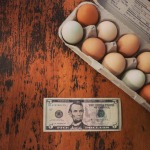